The following scene is not for those with weak constitutions.

Wikipedia has this to say about it:

It has been suggested that the scene is one of the most repulsive in twentieth-century cinema. Director Quentin Tarantino has confessed to being nauseated by this scene, but critics with stronger stomachs have praised its dark humour. (Leonard Maltin noted it as “an unforgettable scene, like it or not.”) It was filmed in the Porchester Centre, a public building owned by the City of Westminster on Porchester Road, London.

I’ll refrain from describing the following site, save for saying that it has mouseover sound-effects, and you should turn your speakers down, lest you get startled out of your seat.

Monster movies aren’t really my shtick, unless they happen to be cheesy “B” monster movies that make me laugh, or something like Jurassic Park, which at least has a sort of scientific edge to it, if an implausible one. So, the Cloverfield trailers that appeared on TV a while back did not move me.

Something about the storyline turned me off: a group of trendy young people from New York flee an impossible, gargantuan lizard. Too deep for me. 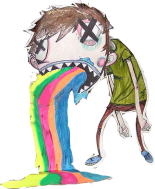 Worse yet (or “better yet” in the view of many), much of the production was filmed with a camcorder (“reality” cinema, you know), generating lots of deliberately herky-jerky, topsy-turvy footage. Think: The Blair Witch Project Meets Godzilla. Or maybe Godzilla meets the Tilt-a-Whirl.

I can feel that larcenous, piss-injected popcorn coming up, just thinking about it.

In all fairness, maybe it’s a great movie.* If you like that sort of thing. However, it seems that Cloverfield has been inducing genuine nausea in some people – a result of the “dynamic” nature of the “cinematography.” So, if you should go to see the big lizard chasing the hipsters and generally making a mess of New York, despite the proliferation across this nation of high performance military jet-aircraft with tactical weapons capable of leveling buildings of steel-reinforced concrete…AND, should you catch a whiff of street pizza in the theater (or maybe those banana-scented crystals like the janitor in grade school used to deoderize kid-barf loci), you’ll know just what happened.

Let’s hope it doesn’t happen to you. If you like disorienting carnival rides that possibly stink of vomit, you’ll probably be fine going to see Cloverfield.

Since the movie opened Jan. 18, some patrons say they felt nausea and dizziness while watching the horror flick, much of which was filmed in a jerky motion with a hand-held camera.

Erika Hasegawa, 32, was watching Cloverfield at a theater in Los Angeles on Tuesday night but had to leave in the middle of the film.

“I’m really nauseous right now — just hold on for a second,” she said, before walking down the hall and retching in a trash can….

“Health! The key to the sucker’s purse!” – Goodlow Bender in The Road To Wellville

“Noni grows in shady forests as well as on open rocky or sandy shores….The plant flowers and fruits all year round and produces a small white flower. The fruit is a multiple fruit that has a pungent odor when ripening, and is hence also known as cheese fruit or even vomit fruit. It is oval and reaches 4-7 cm in size. At first green, the fruit turns yellow then almost white as it ripens. It contains many seeds. It is sometimes called starvation fruit. Despite its strong smell and bitter taste, the fruit is nevertheless eaten as a famine food and, in some Pacific islands, even a staple food, either raw or cooked. Southeast Asians and Australian Aborigines consume the fruit raw with salt or cook it with curry. The seeds are edible when roasted….” (source)

Doesn’t sound very appetizing, does it? No matter, for the enterprising individual. Package something attractively, and make a host of vauge, inflated claims incorporating buzzwords like “health,” or “natural” or “environment,” and you can sell damned near anything. Particularly in America.*

Which is exactly what the Noni-fruit millionaires did, creating a stench above and beyond the smell of the Noni fruit itself. The stench of “snake-oil cures” and those who promote them for vulgar profit.

The same exaggerated health claims which made the Noni millionaires were made about sarsaparilla in the late 19th century, but sarsparilla’s chief application at present is as the flavoring agent for sarsaparilla soda and, of course, root beer, which is made (the real stuff) from the roots of the sarsaparilla plant.