The following scene is not for those with weak constitutions.

Wikipedia has this to say about it:

It has been suggested that the scene is one of the most repulsive in twentieth-century cinema. Director Quentin Tarantino has confessed to being nauseated by this scene, but critics with stronger stomachs have praised its dark humour. (Leonard Maltin noted it as “an unforgettable scene, like it or not.”) It was filmed in the Porchester Centre, a public building owned by the City of Westminster on Porchester Road, London.

Romance: Gone With The Wind 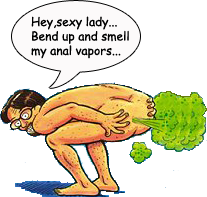 Quite a few years ago, my ex-wife worked with a young lady whose husband was beset by chronic flatulence. Apparently he had decided to embrace his condition, and so he would brazenly break wind and make rude comments about it, often in the most inappropriate social settings. For example, at my wife’s company picnic as we were eating, seated at picnic tables with various of her co-workers and their families, he would from time-to-time lift an ass-cheek, let one go, and say things like, “Whoa, you’d best get upwind from that one,” or “Smell the crack of the Earth…”

Charmed, I’m sure. I’d never seen anything like it. Despite my fascination with the vulgar, even I know where the line of propriety versus impropriety falls.

After we arrived home that evening, my wife told me that this odoriferous fellow, when at home with his wife, would cut enormous protracted farts beneath the bedclothes in the morning, and then forcibly confine the poor woman’s head underneath the blankets until she could hold her breath no longer.

This is tantamount to abuse to my thinking, but what’s worse is that she was beautiful. I mean, a tall, long-legged country girl descended from German milkmaids, with golden hair, sparkling blue eyes, and a face to lauch a thousand ships.

Sigh. There’s no accounting for taste. I guess there must have been something to love about the guy, despite the affrontery of his overactive butt.

The following article was the catalyst for my calling this stinky, stinky man to mind–

Q: I AND my husband are having big arguments over his disgusting habit of getting into bed every night and then spending 10 minutes breaking wind, stinking out the room.After that, I obviously have no interest whatsoever in having sex with him.

He says it’s natural, but as I have pointed out to him many times, so is going to the lavatory, but no one would dream of doing it in the bed.

We have only been married for six months. He seldom did it when we were just engaged, but he says now we’re married, he wants to be able to relax in his own bed in his own house.

Last August, after an all day airshow, my brother and I were making the long trek across the brown fields back to the car when we encountered a spilled porta-pottie. A truck had been transporting the odoriferous receptacle and it had been upset somehow, dumping its contents onto the ground.

The smell was abominable and we gave it wide berth, but not before I snapped a picture of the tanker truck that was there to vacuum up the mess–

Couple more pics and an explanation over at truckspills.com.

Grease, flour and rags, eh? That could almost be an around-the-campfire speciality to warm the hearts and bellies of the indigent – sort of like boiled boot, panbread, or hobo coffee.

One thing is quite certain, without even being there in person to acertain it: the blob stinks.

LEWISTON, Maine — A large, mysterious blob has taken over a major sewer line in the city of Lewiston, leaving public works crews stumped as to how to budge it.

According to city officials, the stretch of 12-inch pipe on Main Street backed up on Jan. 13, and the city has been trying unsuccessfully to clear the line ever since. 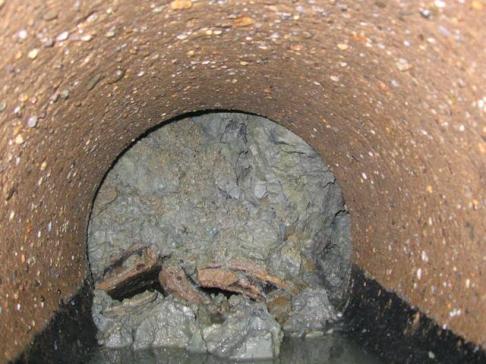 A toejam credit to Middle at Fist Of Blog, for the heads up.