A “tonsillolith,” commonly referred to as a “tonsil stone,” is a nodule that forms in back of the mouth, in the fissures of the tonsils. They are believed to be a composite of bacteria, particles of food, and deceased white blood cells. Analysis has disclosed high levels of sulfur, thus they usually have a pungent odor, which has been described by some as “concentrated” or “condensed halitosis.” When crushed, they are said to exude an odor like rotten eggs. 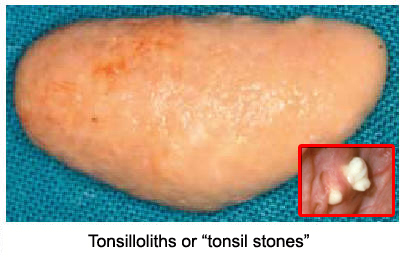 While a definite nuisance, tonsil stones are not known to be medically harmful. As for being socially damaging – well, that’s a whole different ball of…halitosis. I had a professor in college whose breath could be smelled across the room, and there was much discussion among the student body as to what was responsible for his chronic butt-breath. In retrospect, I now wonder if he might have been afflicted with tonsil stones.